Raw sewage damage can have severely negative effects on those who become exposed to it. According to the Environmental Protection Agency (EPA), an average of 7 million people a year suffer from illnesses caused by exposure to raw sewage. Of those seven million, 7% become severely or fatally ill. Though some illnesses are caused due to the fact that raw sewage can be found in drinking water, a majority of the cases stem from sewage or dirty water damage exposure. 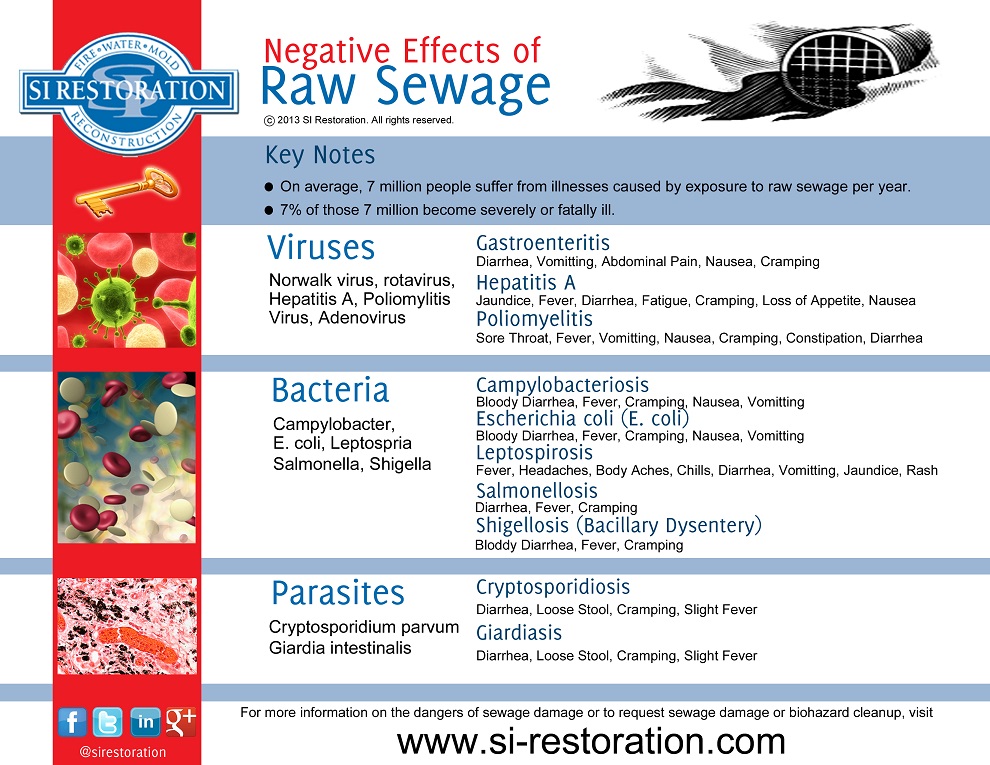 Three main health risks are present due to the effects of raw sewage exposure: viruses, bacteria, and parasites.

Multiple Viruses (such as rotavirus, adenovirus, Norwalk virus) can cause Gastroenteritis. Commonly mistaken as "stomach flu", Gastroenteritis is not accompanied by head and body aches that accompany traditional influenza. Gastroenteritis can cause diarrhea, abdominal pain, cramping, nausea, and vomiting. Hepatitis A can also be found in raw sewage due to flood damage. More likely to spawn symptoms in adults rather than children, sufferers can experience jaundice, fatigue, abdominal pain, loss of appetite, nausea, diarrhea, and fever. The Poliomylitis Virus causes Poliomyelitis which, if left untreated, can cause temporary or permanent paralysis. Other less serious symptoms include sore throat, fever, nausea, vomiting, abdominal pain, constipation, and occassional diarrhea.

Campylobacter can cause Campylobacteriosis. If left untreated, the bacterial infection can become blood borne, causing life-threatening infection. Campylobacterisosis can also cause bloody diarrhea, fever, abdominal pain, cramping, nausea, vomiting. One of the more common forms of bacteria known to the general public is Escherichia coli, or E. coli for short. E. coli can develop into the fatal hemolytic uremic syndrome which can cause kidney failure or death if it is not addressed properly upon initial infection. More well known symptoms in its earlier stages include bloody diarrhea, fever, abdominal pain, cramping, nausea, and vomiting. Another common form of bacteria is salmonella, which can cause Salmonellosis. Most property owners are familiar with this bacteria because of under cooked or raw food products such as meats and poultry being left on countertops or consumed. However, this bacteria thrives in raw sewage and can cause severe diarrhea, cramping, and high fevers. Other bacteria to look out for is Leptospira and Shigella.

Of the more harmful parasites that can infect raw sewage, Cryptosporidium parvum and Giardia intestinalis can cause Cryptosporidiosis and Giardiasis especially. These are the two most common water borne diseases in the continental United States, causing similar symptoms such as diarrhea, loose stool, cramping, and fevers.

To avoid the need for extensive mold remediation services after a catastrophic raw sewage damage event, property owners should act quickly. Mold can begin to grow just 48 hours after the affected area was contaminated by the dirty water.

For more information on effects of raw sewage, water damage, or questions about mold, please call us at the telephone number listed above or contact us online.